Barbara Keller-Willy, former corporate continuous improvement executive with Siemens Corporation, is now Founder and Director of a Fort Bend County non-profit, Monarch Gateway. Monarch Gateway seeks to create contiguous pollinator habitat across the coastal and central flyways of Texas. Ms. Willy is a current two-term State Commissioner and sits on an Advisory Board in the City of Sugar Land where she lives. She is a lead partner with the Field Museum in Chicago and US Fish and Wildlife in the creation of a multi-city Urban Monarch Conservation Plan; President-elect of the land conservancy, “Native Prairies Association of Texas;” and serves in various roles in other community service organizations such as Rosenberg Lion’s Club, Sugar Land Garden Club and Brazos Bend State Park. A certified Texas Master Naturalist with Fort Bend’s Coastal Prairie Texas Master Naturalist chapter, she has long been a champion of our dwindling coastal prairie habitat and its inhabitants, some of which are endangered species or species of concern. Willy is caretaker and owner of a blackland prairie family homestead in Milam County. She is also committed to educating the children of our communities because they will be the future caretakers of our land.

Her interest in native prairie restoration led her on an eight-year quest to develop a propagation method for the finicky native milkweeds of Texas. Last year Willy donated 7000 native milkweed plants to pollinator projects across Texas. More than two years ago, Willy, in her role as Founder and Director of Monarch Gateway, began working with cities in Fort Bend County to create an Urban Pollinator/Monarch Conservation Model with the hope of expanding along the central and coastal flyways and other communities in Texas. City employees from surrounding municipalities, but especially Sugar Land, helped develop a plan that would deliver meaningful results and be sustainable long-term. She will share the results of that work, “Monarch Host Cities Partnership Project” and discuss community response to her work.

Monarch Gateway is a 501(c)(3) non-profit organization and leader of the Monarch Host Cities Partnership Project with a goal of creating contiguous Monarch Host Gardens on city and municipal properties along central and coastal Monarch migratory flyways. 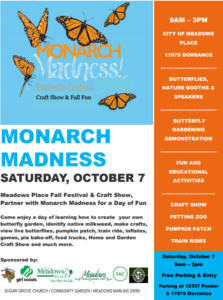